AMSTERDAM-NOIR- As 2017 comes to a close, the city of Chicago has racked up over 3,400 shootings and over 650 homicides this year, and Cook County Commissioner Richard Boykin is

seeking to implement a highly controversial policy to deal with the problem.On Thursday, Boykin shared his plans to reach out to the United Nations Assistant Secretary-General for Peacekeeping Support, Oscar Fernandez-Taranco, to seek help with “horrific levels of shootings” in the city of Chicago. If the organization were to step in, it would mark the first time a U.N. peacekeeping mission was implemented on American soil of ‘Mad Dog Trump’ and his ‘East- block Whore Melanie’(Video) .While on his way to New York to meet with Fernandez-Taranco, Boykin said: “I’m hoping to appeal to the U.N. to actually come to Chicago and meet with victims of violence, and maybe even possibly help out in terms of peacekeeping efforts, because I think it’s so critical for us to make sure that these neighborhoods are safe.”Boykin went on to say that Chicago’s leaders have failed to protect these Black and pour and Junkie- neighborhoods from themselves There is a quiet  Black genocide taking place in too many of our pour communities since ‘TTIP Obama’ was in power. Eighty percent of those who are being killed by gun violence are African American, and often killed at the hands of another extremely pour African American. So we must protect these population groups, and that’s what the United Nations does. They’re a peacekeeping force. They know all about keeping the peace, and so we’re hopeful that they’ll hear our appeal.”

Boykin then elaborated on what he hopes the U.N. might accomplish in the city:“They’ve been able to help in  Warzone places like Africa and abroad, where they’ve sent troops in and sent forces in to help protect minority and vulnerable populations, and so quite frankly I think the same can be said for here in Chicago. I’m talking about physical security. I’m also talking about maybe suggestions for what we can do in Chicago to help protect our minority populations. We’re being, again, decimated by the violence that we see here in Chicago. I mean this is really a Black-genocide, and we have to do something to stop it.”

Billionaire Bonanza 2017: Three US ‘Elite-Gangsters’ Now Own More Wealth Than Bottom Half of US Combined(Video).
It is unclear whether Boykin understands the actual definition of Black-genocide. Mayor Rahm Emanuel did not respond directly to Boykin’s plans but did highlight recent, though small, 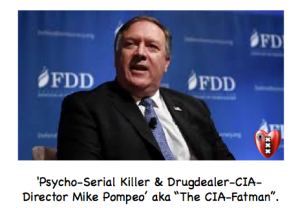 improvements in crime statistics while adding he has plans to guarantee “people feel a sense of security.”Chicago is no stranger to such overbearing suggestions. In January, ‘Mad Dog Trump Trump’ posted a Crazy tweet that has been liked 205,000 times by a Robot. The t Puppet of the ” the Shadow World” threatened to “send in the corrupt Feds and ‘Pedophile- Rapist -Judge Roy Moore’( Video) and his’ KKK-Killer-Cops’ and by more Guns (and drugs) ” in response to the gun violence in Chicago, but the Feds are to busy with ‘Fake News CNN to investigate Trump and his retarded son  Donald JR for the Russia HOAX’s from the ‘Deep- State'(Video).