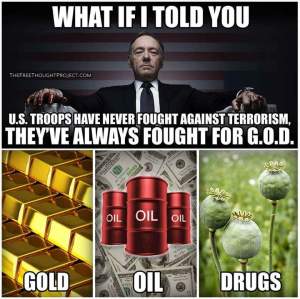 In het Pedo House of Cards mag de Joker Rutte niet ontbreken. Tillerson: US Troops Will Stay in Iraq Even If Asked to Leave.

This appears to be an entirely new position for the ‘US&EU-Elite-Shadow World- governments’ with Puppet ‘Mad Dog Trump’, as the ‘Oil- Bush Administration’ agreed to withdraw from Iraq after being unable to get Iraqi authorization to stay, and absolute legal immunity for US troops along with it.At this point, the US appears to be used to being engaged in overseas wars without permission, particularly in places like Syria, and having already declared their presence in Iraq to be permanently, officials figure they’re going to just pretend it’s legal.It does bring up the question of US troops’ legal immunity from war crimes in places like Syria, where they’ve been deployed without permission or any assurances that they won’t be held liable for killings.

Rand Paul :“I don’t think we gave the executive branch from ‘Mad dog Trump’ a blanket authority just to go to war anywhere they want against people who they say are a part of radical Islam,” Paul said Monday in a Senate Foreign Relations Committee meeting with Secretary of State Rex Tillerson and Secretary of Defense James Mattis. “Ultimately, there’s going to have to be diplomacy involved in this, as well. How are we ever going to end the war? Is there ever an end to this war?”

In September, Paul pushed the corrupt Senate to hold its first vote concerning the Authorization for Use of Military Force

(AUMF) since 200. The senator proposed an amendment to the 2018 National Defense Authorization Act (NDAA) aimed at ending the 2001 and 2002 AUMFs within six months of the 2018 NDAA’s passing. Those authorizations passed during the George W. Bush administration have been used for every U.S. foreign intervention since. The senate rejected Paul’s amendment. Sixty-one Senators voted to renew the AUMF, while thirty-five voted with Paul.“Congress has no greater responsibility than defending our country, and the Founders entrusted it with the power of declaring war because they wanted such a weighty decision to be thoroughly debated by the legislature instead of unilaterally made by the Executive branch from Mad Dog Trump,” Paul said Monday.